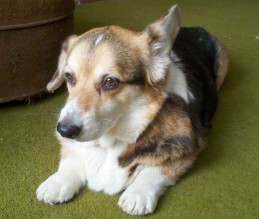 Lightning, clear-veined and jagged, cut through the moonless sky as rolls of thunder cracked in the air surrounding the house. It would be hard to drag Memphis outside to do his business, but the girls would gladly go. I sighed. Two trips tonight. I’d take Merri and Rhonda, and then come back for my stubborn male Corgi who hated rain but loved snow.

As we walked off the porch and into the backyard, rain began to fall in thick sheets – curtains of relentless rain. It seemed as if someone had slit the sky ceiling, allowing rain to pour down so hard and fast that we were instantly drenched. Why hadn’t I thought to bring an umbrella along? Late summer birthed storms that were unpredictable and sometimes wild. It was too late now to turn back for an umbrella or rain slicker. I slogged on in silence. Walking in rain is not my idea of fun.

The backyard quickly turned into tiny rivulets and muddy slopes. A pool of water formed between the two silver maples, It was going to be a bad storm. I cast a quick glance toward Sandy Run Creek. Although I could not see it, I was almost certain I could hear it, gurgling and slurping its way through the park,  churning and gushing beneath the old bridge on Limekiln Pike,  rushing and roaring its way through the golf course.

It had been raining almost every day since September had started. The creek was running higher than normal. It wouldn’t take much more for it to overflow its banks. I shivered more from fear than the cold. I had already lost a car to a flash flood. The creek was a little too close for comfort, even though I had never even had water in my basement. But this storm was different…

I trotted the dogs back to the house and grabbed towels to dry them off before they sent water everywhere. Then I called for Memphis. Where was that dog?  I called again and again as I walked through the house. Nowhere to be found.  I raced up the stairs, looking in each room and even under the beds. Then I panicked. Did he go out the door unnoticed as I took the girls into the backyard?  Memphis was a tri-colored Corgi, mostly back. Maybe I didn’t see him follow us.

With my heart hammering in my chest, I flew down the steps, into the kitchen and into the utility room to grab a flashlight, once again forgetting to nab an umbrella. As I darted past the downstairs bathroom, I stopped and backed up. Could it be….? And there he was, my Memphis, wedged behind the toilet in the downstairs bathroom. Obviously, he was preparing for a hurricane or tornado. No amount of coaxing would get him to budge – not even dog biscuits. Memphis was terrorized by the crackling and booming.

Finally, sometime after midnight, I was able to retrieve Memphis and cuddle him in my arms.  And then I thought of Snoopy in the Charlie Brown comic strip: “It was a dark and stormy night…”  I had a story to share with the fifth grade students tomorrow. I thought they would like it.

The challenge of flash fiction is to tell a complete story in which every word is essential, to revise until you’re left with nothing but the core of a story. Flash fiction has been called by many other names including:  short-short stories, sudden, postcard, minute, furious, fast, quick, skinny, and micro fiction. In France these writings are called nouvelles.  In China this type of writing has appropriate  names: little short story, pocket-size story, minute-long story, palm-sized story.

Purists insist that it is a complete story told in less than 75 words; others say 100 words should be the maximum. Many flash fiction writers consider anything under 1,000 words as flash-worthy.  There are even a few who stretch their limits to 1,500 words. Today, I have attempted 369 – a set of three 69-word stories sharing a common subject.  This is my favorite structure for flash fiction. As you will see, I wrote about my dad and hints of growing up Jewish.